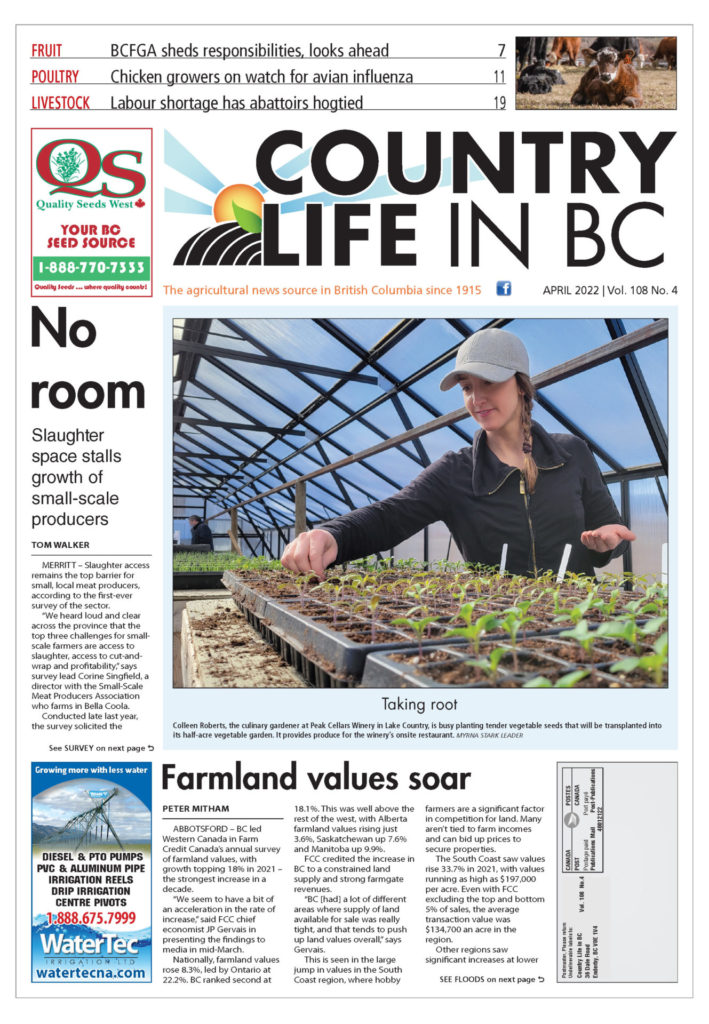 Peter Robinson and Kristine Webber highlighted their efforts in riparian restoration during a tour of their Mayne Island farm. SANDRA TRETICK

MAYNE ISLAND – Hedgerow Farm and Deacon Vale Farm on Mayne Island opened their gates on February 26 to welcome a group of 20 experienced, new and prospective farmers from the outer Gulf Islands for the final field day of a six-week introductory course on soil health hosted by the Gulf Islands Food Co-op in partnership with Kwantlen Polytechnic University (KPU).

When farmers are starting out, there’s a lot to learn and online resources can be overwhelming. There’s often little that’s specific to growing conditions in smaller regions such as the Gulf Islands.

Closing that gap was top of mind for co-op president Roz Kempe when she reached out to Kent Mullinix, director of the Institute for Sustainable Food Systems at KPU. She was inspired by the Healthy Soil Initiative out of California and wanted to see if KPU could recreate that on a smaller scale.

“If we could just have some support on the Gulf Islands to understand what soil health actually means,” recalls Kempe. “Not just soil chemistry, but the entire ecosystem of soils and how to improve that. Kent was very enthusiastic.”

Mullinix was interested because no one else in BC was doing anything similar. Together they prepared a proposal and VanCity came through with a $20,000 grant through its Community Partnership Program.

“The local piece is really important,” says Kempe. “It’s not just learning from the United States or from the Lower Mainland or the Fraser Valley where [there’s] so much large-scale farming. It’s different here on the Gulf Islands.”

Hedgerow Farm co-owner Kristine Webber says the program provided much- needed on-farm extension support for farmers like herself. Webber received a degree in agriculture 20 years ago, but it taught her about conventional agriculture. That wasn’t the direction she and her partner Peter Robinson wanted to go when they purchased the farm six years ago.

Taking a whole-ecosystem approach is what program instructor Amy Norgaard, also a part-time instructor at KPU, was keen to impart to the group.

Through a series of four evening Zoom sessions and four weekend field days – one each on Saturna, Galiano, Pender and Mayne – the group learned the basics of soil science, the role of nutrient management and cover cropping, why soil testing is important and how to take samples. Norgaard also provided links to useful resources, shared videos, brought in guest speakers  and allowed plenty of time for questions and discussion.

Farms around the Gulf Islands are as diverse as the islands themselves and local farmers jumped at the chance to have their soil tested. KPU student Julia Bendtsen, who is completing a graduate certificate in food security, had more volunteers for this aspect of the program than the grant funding could support. Five farms – some established and some bare land – were selected and each received a comprehensive nutrient management plan.

Norgaard says soil health can be attained largely through a combination of cover cropping and composts. But it’s rarely that simple. Soil health is really the result of an iterative process that people need to revisit year after year.

“There’s no silver bullet,” she says. “Start somewhere. Make a small change and see how it performs. I think some people want to have all of their ducks in a row before they initiate a plan. The reality is there’s all these microclimates, all these different soils, all of these different background characteristics that inform how somebody is going to go about managing their soil. There’s no better way to know what’s going to work best on your property than to get that direct feedback by making these incremental changes and fine tuning with your own observations.”

Webber says her biggest takeaway was finding out how much knowledge already existed in the farming community.

“We got to meet experts to talk about soil and nutrient cycling and cover crops and soil health, but we also got to meet other small-scale farmers and learn from them what they’ve tried, what’s been successful and what hasn’t,” says Webber. “I have a lot of people now I can ask for advice and some more friends to grow with.”

The lack of extension crops up in various regional agriculture plans, including the 2017 Southern Gulf Islands Food and Agriculture Strategy commissioned by the Capital Regional District. The strategy actually led to the creation of the co-op in 2018.

Kempe knew there was a need for the course, which ran as a pilot this year, but she was surprised at the level of interest. They planned for 20 participants, but more than 64 signed up. Coordination across the islands proved challenging, but she credits the co-op’s project coordinator Ben Dunsmuir for his efforts to pull together four field days on four different islands while adhering to COVID-19 protocols.

Kempe hopes the course will serve as inspiration for other communities looking for extension support, but she admits that they just scratched the surface in four Zoom lectures.

“Soil health is so in-depth,” says Kempe. “There’s so much to learn. We could be doing this for years and years and still learn more about soil. It’s a start.”

The BC Ministry of Agriculture and Food hasn’t completely exited the world of extension services, despite what many believe. Under the New Entrant Strategy – part of Grow BC – there’s the BC Land Matching Program and support from new entrant agrologists. Grow BC also enables producer organizations to provide extension and organize events ranging from workshops to on-farm demonstration projects, although small-lot producers in the Gulf Islands may not find these a good fit for their specific needs.

There is also AgriServiceBC, the ministry’s one-stop shop for farmers to connect with a qualified expert for one-on-one help to access the right funding programs, solve technical production problems, grow business or research opportunities.

Some of the participants in the healthy soils course were previously unaware of these supports, but Norgaard addressed that and introduced Emma Holmes, the ministry’s organics specialist.

In retrospect, Norgaard said she wanted the participants to walk away from the program feeling empowered to farm more confidently.

“People almost hesitate to start and I see this lack of confidence,” says Norgaard. “I see that all over the map. Farmers think they’re unique and they don’t have the answers, but they think their neighbour does. I hope these field days have provided some ‘neighbour-to-neighbour’ information sharing that can lower those risks of change and increase confidence in adopting new practices.”