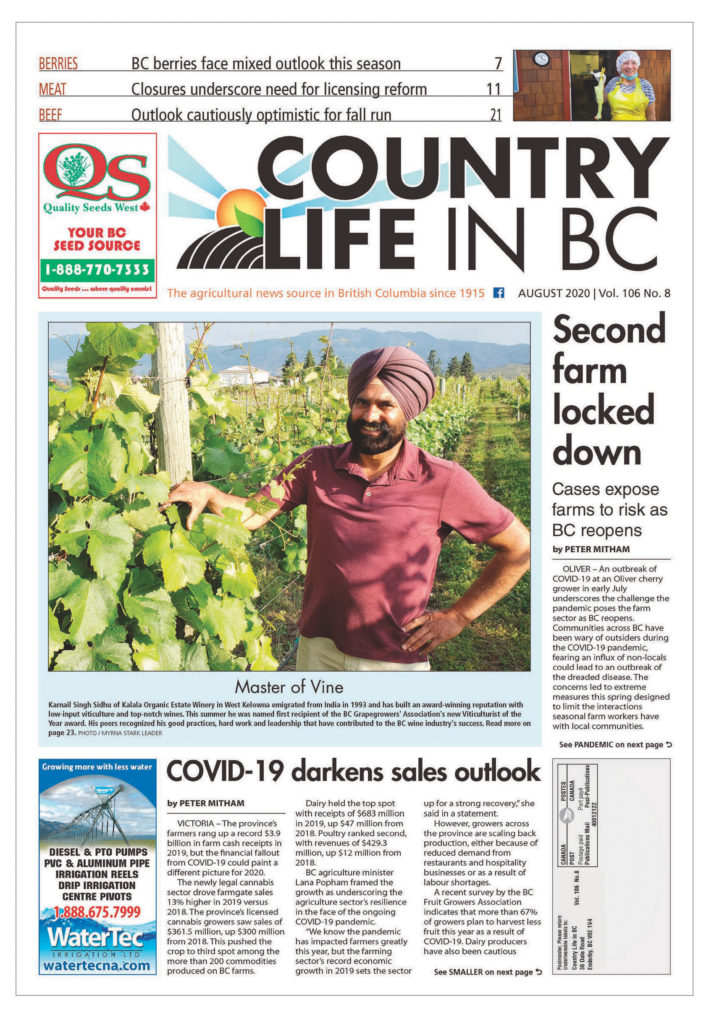 Back 40: A fire prevention and response plan is crucial

OpEd: Food priorities need to focus on the basics

Inaugural viticulturist of the year chosen

Consumers are responding to transparency

ARMSTRONG – Small-scale producers say the province needs to rebuild rural food processing capacity if it wants them to thrive.

While small, local producers have come into their own in recent years and drawn several aspiring farmers to rural acreages, the rules often restrict growth and leave them scrambling for the kind of support that was withdrawn as the economy became centralized.

The provincial small-lot poultry quota of 2,000 birds a year is a case in point.

Andrea Gunner of Rosebank Farms in Armstrong  is a business consultant who regularly speaks to farm groups about the importance of knowing production costs and planning for profits. She knows how tough it can be.

A small-lot grower with just 2,000 birds cannot make a living.

“Absolutely not,” says Gunner without hesitation.

Gunner and her husband Steve have made Rosebank work by combining several small-lot quotas to direct market about 3,500 chicken and 300 turkeys a year to some 600 buyers.

But it still isn’t enough. In order to make ends meet, Gunner and her husband have part-time jobs off the farm.

“If we had other species and value-added and managed it full time, I think it could be viable,” she says.

This is the direction they are heading with the business, but many small producers have trouble making the leap.

Linda Geggie, executive director of the Capital Region Food and Agriculture Initiatives Roundtable (CRFAIR), told the Expanding the Influence of Regional Agriculture Support workshop organized by the Alberni-Clayoquot Regional District in Duncan this past February that the biggest challenge facing small-lot farmers in the Capital Regional District is moving from modest income direct marketing at the local farmers market to a full-time income.

The Gunners have invested in a provincially inspected processing plant, Rancho Cooling in Armstrong provides them with freezer space and they can transport their product to an established customer base willing to meet them at designated pick-up spots, but they wonder if there isn’t a better way.

Julia Smith, president of the Small-Scale Meat Producers Association, quips that her business model is based on meeting her meat customers in gas station parking lots. But Lisa Dueck of Sterling Springs Chicken in Falkland says there’s no way she is doing that.

“I’m not going to sit at a truck stop with a cash box,” she says.

Instead, Dueck gets up at 4 am twice a week to be at the farmers markets in Kelowna and Vernon when they start at 8 am.

The model is not one that appeals to Gunner, who sold flowers at the local farmers market for several years.

She recalls the early starts, hoping the weather and her display and smiling personality would help her sell everything she had brought. It didn’t.

What’s needed, she says, is a renewed appreciation for and investment in the basic elements of the food system that connect food with consumers.

“We need to rebuild local infrastructure,” she explains.

The processing, cold storage and distribution and marketing infrastructure that were part of the less-centralized economy of the past have disappeared, she points out.

A centralized processing plant is efficient and cost-effective but disruptions related to COVID-19 at Alberta beef plants this spring jeopardized 70% of the country’s processing capacity.

“People will always ask me what are the top three things that we need to move sustainable food systems forward in the province and I simply can’t answer them,” she says. “There are so many parts to the issue and we have lost so much capacity in the province.”

Gunner and Brynne both put agriculture extension programs at the top of their wish lists.

Nevertheless, they remain part of the province’s mandate under the Ministry of Agriculture and Food Act, Brynne points out.

Brynne says that when she first approached the Columbia Basin Trust and the three regional districts about funding the popular Kootenay Boundary Farm Advisors program it was an easy sell.

“But not all regional districts have the funding or the desire to take on a responsibility mandated to the province,” she says.

Brynne is one of the 13 signatories to an open letter to Premier John Horgan in July providing 21 recommendations to foster safe, sustainable and resilient food systems.

She says the group has already heard back from the province. She expects a meeting in the coming weeks, but a quick solution is unlikely.

“It has taken 50 to 60 years to deconstruct our localized food economies into a globalized food supply chain,” she notes. “It is going to take a long time and a complex set of interventions to turn it around.”

That’s where government leadership and dollars are needed.

“In terms of recreating the infrastructure of our food system, there are some things in which the business case will never be there,” says Brynne. “There will need to be a significant input of capital to rebuild infrastructure and level the proverbial playing field.”