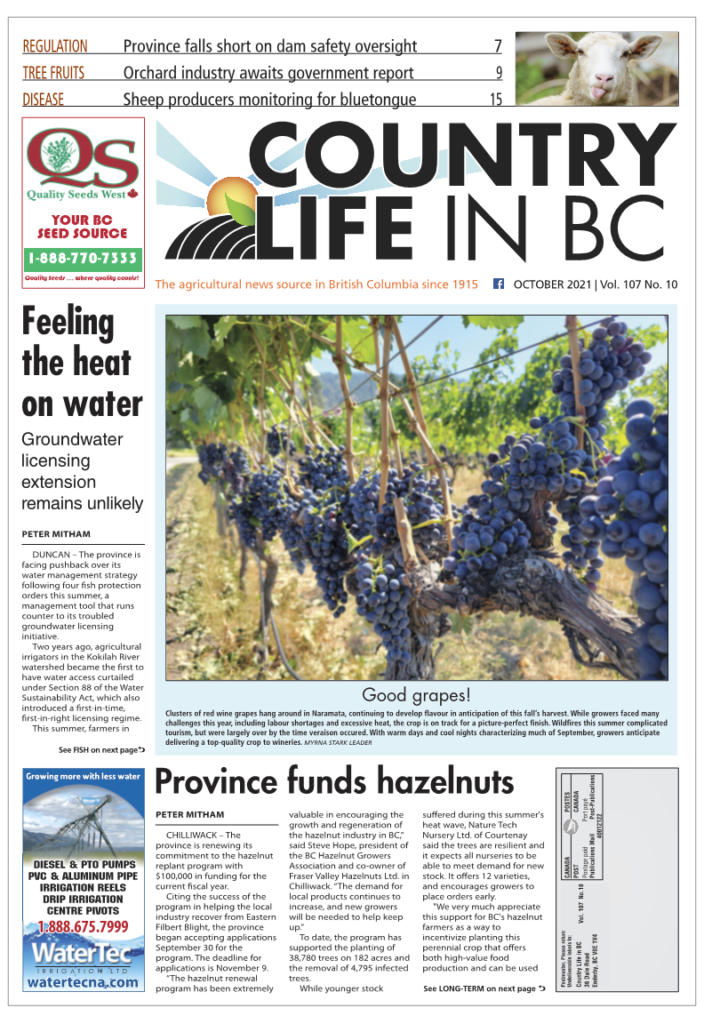 DUNCAN – The province is facing pushback over its water management strategy following four fish protection orders this summer, a management tool that runs counter to its troubled groundwater licensing initiative.

Two years ago, agricultural irrigators in the Kokilah River watershed became the first to have water access curtailed under Section 88 of the Water Sustainability Act, which also introduced a first-in-time, first-in-right licensing regime.

This summer, farmers in the Koksilah and three other watersheds – the Bessette, West Kettle and Salmon – saw protection orders issued with little notice, effectively cutting them off overnight from water extractions through September 30 (access was restored in the Bessette Creek watershed September 8). Violators faced the prospect of a million-dollar fine or up to a year in jail for breaching the orders.

But many are criticizing the government for going against the spirit of its own laws.

“The WSA is fundamentally a first-in-time, first-in-right act,” says Mike Wei, the province’s former deputy comptroller of water rights who now works as an independent consultant. “When you do a Section 88 fish protection order, you’re always cherry-picking, which takes a lot of staff time and politics. … They try to pick the politically least-impactful users.”

But in the case of livestock producers, the production impacts are significant even if the political impacts aren’t.

Cowichan dairy farmers voluntarily developed an irrigation schedule in order to maintain water access in the Koksilah watershed this summer but still found themselves cut off in mid-August.

“A fish protection order was still issued despite their best efforts, impacting forage production in an already challenging season,” says BC Dairy Association executive director Jeremy Dunn. “BC Dairy has made the case to government that long-term solutions are urgently needed to maintain critical water supply for agriculture and conservation.”

But that’s exactly what the Water Sustainability Act is meant to do. By arbitrarily cutting off the very users they’re trying to sign onto a system based on seniority, the province is effectively undermining confidence in the system.

“You can’t just rely on this one tool when the act is fundamentally based on a seniority system,” says Wei. “They probably do it because they don’t have everybody in the licensing fold yet. … Once the deadline’s over and they get a better handle on it, they can’t keep relying on Section 88. That’s just not fair.”

Wei coauthored a report earlier this year on the province’s challenges implementing its groundwater licensing regime for the Partnership for Water Sustainability in BC. He says the partnership will be briefing government this fall on its concerns.

The province has been trying to register and license upwards of 20,000 wells since 2016, but has issued little more than 1,200 licences.

BC Ministry of Forests, Lands, Natural Resource Operations and Rural Development received an extra $11 million in this year’s provincial budget to support the activities of its regional offices, which are on the front lines of the licensing process, but competing priorities mean results to date have been scant.

It’s not just growers who are affected. Retail and hospitality ventures are also vulnerable, endangering a broad cross-section of rural businesses.

In addition, the province says access to dugouts will also be cut off, though it has paused consultations with ranchers regarding a new livestock watering regulation.

The slow pace of licensing concerns the BC Cattlemen’s Association, which has noted a subtle shift in tone with respect to water conservation. Requests are no longer framed as voluntary.

During this summer’s restrictions, the association asked the province to let ranchers access streams to fight fires on their properties, which would help protect valuable range.

Despite the changes, BCCA says the pilot of a six-tier drought rating system for the province has gone smoothly. On this point, at least, it’s in agreement with the ministry.

“Overall, we feel implementation of the new drought-rating system has been a success,” a statement from FLNORD told Country Life in BC. “There will be an internal review this fall to determine if any updates or changes are required for the classification system.”