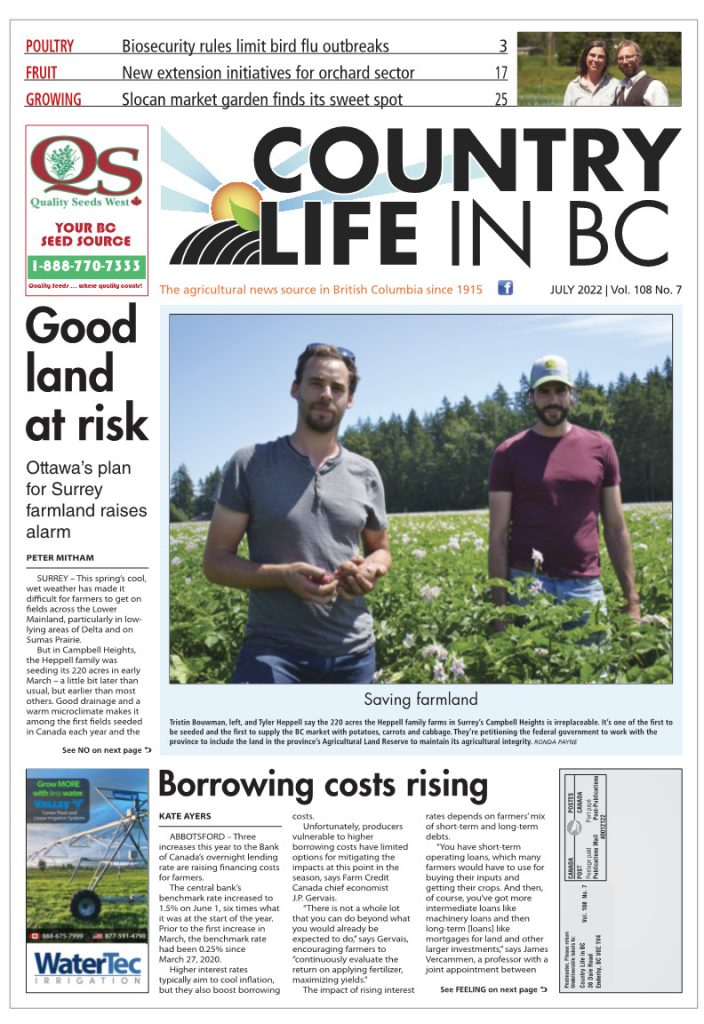 From far and white

Back 40: A reality check for those living in a virtual world

Ukraine’s loss in the global market is everyone’s loss

Sidebar: What about larger scale cooperatives?

BC Tree Fruits Cooperative members narrowly defeated a motion to turf the co-op’s current board and management at a special general meeting in Peachland yesterday. The meeting attracted 152 of the co-op’s 217 members. The motions required a two-thirds vote to pass. This did not happen, and all were defeated. More in this morning's Farm News Update from Country Life in BC. ... See MoreSee Less

BC Tree Fruits Cooperative members narrowly defeated a motion turf the co-op’s current board and management at a special general meeting in Peachland, November 22. The special meeting…
View Comments

The annual horticultural growers’ short course will be organized by the province in 2023 and rebranded as the Regenerative Agriculture and Growers’ Short Course. The event will take place January 26-28 at Tradex in Abbotsford during the Pacific Agriculture Show. LMHIA will remain fully involved in program development, however the province is adding ‘Regenerative Agriculture’ and ‘Indigenous Reconciliation’ sessions to the lineup. Its 'Every Chef Needs a Farmer' event will also take place at the show. ... See MoreSee Less

The annual horticultural growers’ short course will be organized by the province in 2023, according to the Lower Mainland Horticultural Improvement Association, which has hosted the 65-year-old…
View Comments

With four new commercial farms testing positive Saturday for highly pathogenic avian influenza, BC poultry growers are hoping continued adherence to red-level biosecurity protocols will prevent the farm-to-farm spread of the disease. Right now, wild birds are the suspected source of infections, despite ongoing rules against keeping birds outside. Canadian Food Inspection Agency staff and vets are examining the latest cases to better understand the origins of the current wave, which has affected four farms with turkeys (one also had layers), two broiler breeder farms, and a duck farm. The BC Ministry of Agriculture & Food has three avian influenza sessions for small flock poultry owners scheduled over the next couple of weeks, including an in-person session in Delta tomorrow at 530. For more information: buff.ly/3UWlY7q ... See MoreSee Less

Two broiler farms in Abbotsford and a small-lot flock in Bulkley-Nechako tested positive for avian influenza this week, four weeks after BC's last reported cases. CFIA is in the process of designating control zones around the two Abbotsford properties. A total of 275,800 birds in BC have been impacted by AI this year, and the ongoing outbreak has the province shifting to a long-term management strategy rather than a short-term emergency response. ... See MoreSee Less

Tristin Bouwman, left, and Tyler Heppell say the 220 acres the Heppell family farms in Surrey’s Campbell Heights is irreplaceable. It’s one of the first to be seeded and the first to supply the BC market with potatoes, carrots and cabbage. They’re petitioning the federal government to work with the province to include the land in the province’s Agricultural Land Reserve to maintain its agricultural integrity. RONDA PAYNE

SURREY – This spring’s cool, wet weather has made it difficult for farmers to get on fields across the Lower Mainland, particularly in low-lying areas of Delta and on Sumas Prairie.

But in Campbell Heights, the Heppell family was seeding its 220 acres in early March – a little bit later than usual, but earlier than most others. Good drainage and a warm microclimate makes it among the first fields seeded in Canada each year and the first to supply the BC market with potatoes, carrots and cabbage. This puts it at the forefront of the local supply; without it, the marketing window for imported vegetables would be longer.

“It is integral to Western Canada’s food production, in that it pushes back Mexico and California product,” says Wes Heppell, whose family has farmed the land since 1974.

Heppell farms a total of 650 acres, the majority of it on Sumas Prairie. Wet conditions this year meant that even in mid-June, equipment was getting stuck. That wasn’t the case in Campbell Heights, which makes it unique for the Lower Mainland, if not Canada.

“There is no other land like it in Canada,” he says. “We’ve looked all over the province – the Interior, everywhere – and you just cannot find what we have here.”

But the future of the site, which totals about 300 acres including forested land, is in jeopardy.

Declared surplus by Innovation, Science and Economic Development Canada in 2016, it’s been farmed on a year-to-year lease ever since. Public Works and Government Services Canada began preparing for disposition of the property last year. This summer, Crown corporations, provincial and municipal governments and First Nations will be asked to express interest in the property prior to it being offered to private buyers.

“This could be the last season that the land is producing before it gets put into a trajectory of disappearing from agriculture, as we understand it,” says Tristin Bouwman, crop manager with Heppell and vice-president with the Surrey Farmers Institute, who has been working to raise awareness of the potential loss of the land.

Bouwman has launched a petition on Change.org calling on Ottawa to work with the province to include the property within the Agricultural Land Reserve and urging Surrey to amend its official community plan to designate the land for farming and greenspace.

“Are we prepared to take the most resilient, fertile land and pave it over?” he asks. “If this piece is lost, there’s nothing that could replace this land’s productive capacity.”

A leading option for the land – if local First Nations don’t express interest in it – is industrial space. The property lies within the Campbell Heights area, a key source of industrial land for Metro Vancouver, which claims the tightest industrial market in North America with virtually no space available unless it’s built. Unlike a smaller tract on the south side of Campbell Heights,  also in line for development, it doesn’t need rezoning.

“Since about 2000, it’s been in the official community plan for industrial development,” Bouwman says. “We’re moving towards that now, and it’s the time that people have to be heard as to whether or not this critical piece of land should be lost forever.”

There’s growing momentum to save the land. Dozens of politicians from all levels of government have toured the property in recent weeks, just as the first nugget potatoes headed to local stores – the first of close to 50 million servings the land will produce this year.

With a civic election looming this fall, Surrey mayor Doug McCallum has offered to purchase the site.

“If the federal government were to make this property available to the City of Surrey, I would ensure an offer would be made,” he said in a statement, June 21. “If successful, I would pledge that the property would remain as farmland so it can produce harvest after harvest for generations to come.”

Bouwman hopes the candidates who run in this fall’s civic election will stand up for the land.

“We think decision-makers at all levels of government should come out in support of the local food supply and protect this land by committing to amend municipal plans and by including the land in the ALR,” he says.

The BC Agriculture Council supports the inclusion of the land in the ALR, saying the collaboration of the federal and provincial governments would send a strong message.

“If these lands are recognized as part of the Agricultural Land Reserve, it would send a powerful signal that agriculture is valued in British Columbia and that different levels of government can cooperate effectively to ensure our communities’ food security,” BCAC executive director Danielle Synotte said in a statement.

The public is watching, Bouwman says.

“This is an issue that is a public issue, that whenever they hear about it, really cares, because it’s about the future of our food,” he says. “We’ve learned in the last two years how vulnerable supply chains are. We’ve learned the importance of domestic supply. To lose this piece of land would be a significant blow to our local food production.”

Irrigation shouldn’t be an afterthought
Next Post: Guaranteed returns for apples