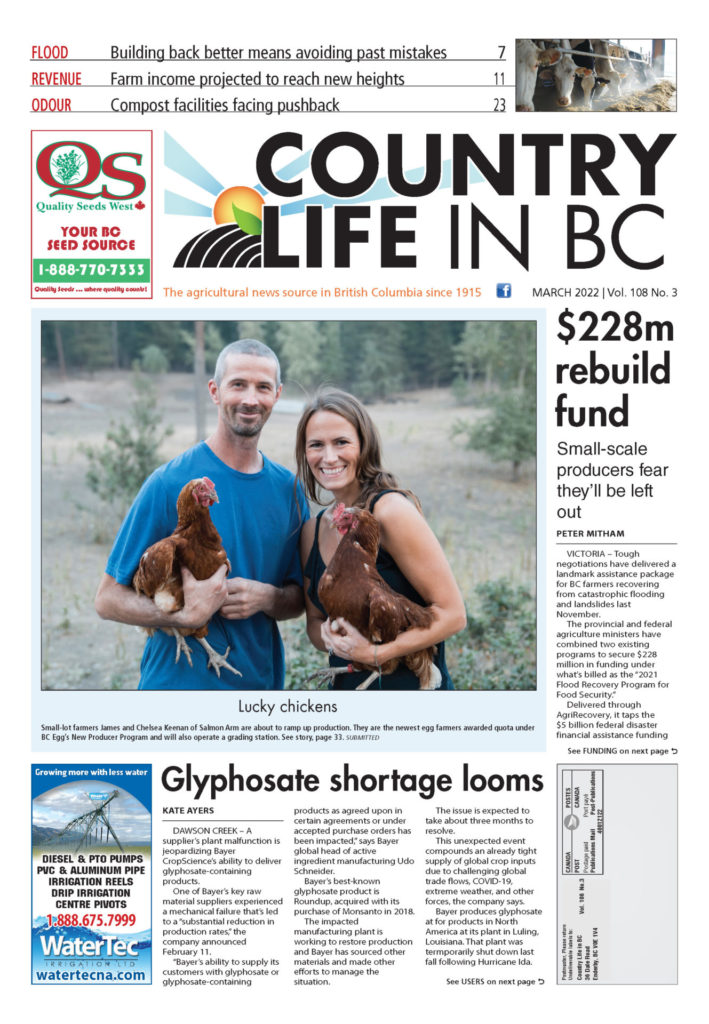 The rush to rebuild in areas of the province hammered by rain and floodwaters needs to include strategies that reduce future risk. SUBMITTED

KELOWNA – Planners and decision-makers are in a difficult position as they face the challenge of creating a plan to mitigate damage from last November’s unprecedented rainfall.

On the one hand, property owners want a return to life as it was, minus the water. But at the same time, building back – even if it is better – does not guarantee that future disasters won’t be repeated.

If nothing changes, the same properties face the same potential for damage in the future, warns Tamsin Lyle, principal of Ebbwater Consulting in Vancouver.

Lyle spoke to the Okanagan Basin Water Board’s water stewardship council in February and reminded them that flooding is both natural and necessary.

“Flooding is the reason we have the wonderful farming area of the Lower Mainland,” she says. “But when flooding interacts with things we care about, we have a problem.”

That interaction caused hundreds of millions of dollars in damage in November to more than 1,100 farm properties on Sumas Prairie, in the Nicola Valley and Princeton, according to the province. Yet if planners don’t expand their toolbox of mitigation strategies, we are at risk of the same amount of damage occurring again, says Lyle.

Lyle urges planners to evolve past a singular approach to flood management.

“We need to break out of the serial engineering path,” she quips. “Don’t put so much emphasis on dikes. They do breach and last November showed us how catastrophic a breach can be. There are so many other non-structural things we could be doing.”

Restoring the more than 600 km of dikes across the Lower Mainland shows that government is responsive and is good for people, says Lyle, but it doesn’t address the fundamental risks extreme weather poses.

“We know that climate change will continue to increase the hazards of extreme weather events and we know that expanding development in the Fraser Valley will increase the numbers of people vulnerable to those events,” she says.

The latest flood event caused disruptions similar to those of the 1948 freshet, notes Lyle.

The accepted response after 1948 was to build more dikes to protect the population living on the flood plain, which is now more than 10 times what it was then.

With land stewardship, planners and government work to maintain and restore natural assets and systems such as watersheds, wetlands and riparian areas.

Land use management involves developing strategies and regulations to reduce exposure. Limiting or selecting development within a flood zone reduces the number of people or businesses that could be impacted.

Sumas Prairie has much to offer as a farming location but building a processing operation such as a packing facility outside the flood zone would eliminate the risk for that business. Provincial animal and plant health labs that were closed due to flood damage also don’t need to be on the floodplain.

Building management involves strategies and regulations that can reduce the sensitivity of structures to flood damage. Building codes can require flood protection, ranging from placing structures above flood levels (Sumas Prairie homes often sit atop a berm) to using flood-resistant materials, or even constructing a permanent water barrier around a building.

In the rush to return to normal, Lyle says planners can overlook other important values. The dikes built following the 1948 flood often failed to consider Indigenous values.

While no one would criticize the rapid rebuilding of critical highway infrastructure following the most recent floods and landslides, she says thousands of tonnes of untreated rock were dumped into important waterways in the process.

She has spoken with pension fund executives who are worried about the losses that they’re taking on real estate investments in the Fraser Valley. Banks are reluctant to lend money right now to Fraser Valley farmers, and insurers are declining coverage.

“Insurers are saying that are no longer interested in insuring as it doesn’t make sense on the financial side,” she says. “These are really powerful tools for change.”