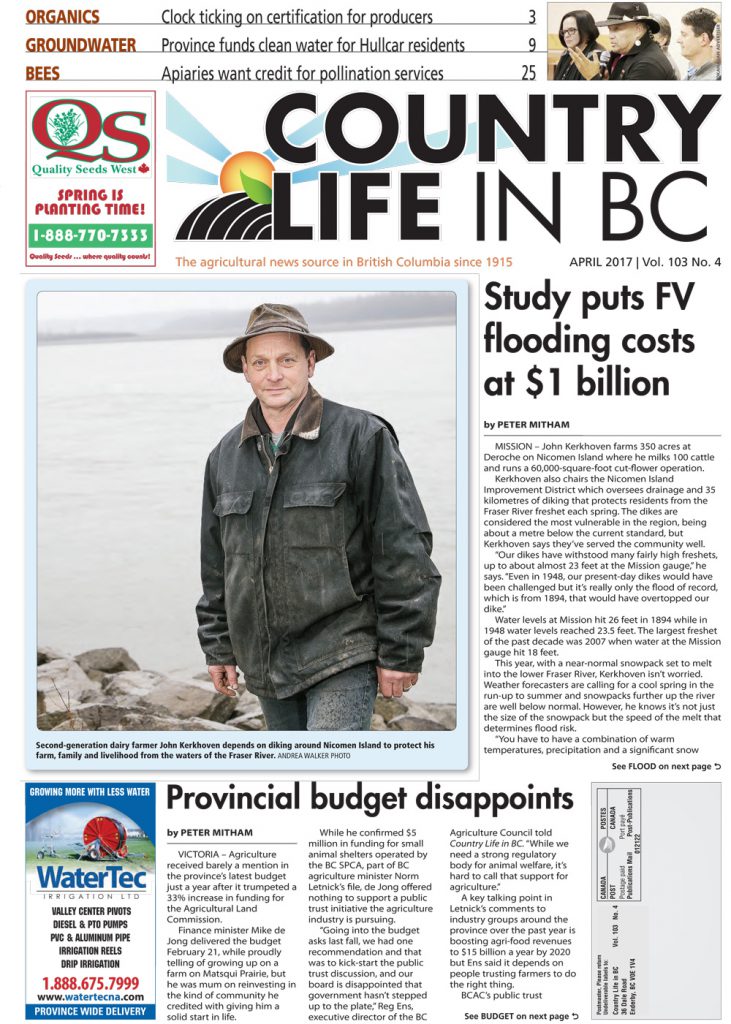 Clock ticking for ogranic growers to get certified

Back Forty: It’s our responsibility to set the record straight

Public trust needs to be built, not lost

Chicken growers unable to keep up with demand

BC agriculture investment set to drop

Birds of a feather

Sunshine Coast fights for brewers to locate on farmland

What’s the problem with a few deer

Rising from the ashes

Carrots to cattle on menu at Smither event

Wannabe: Don’t ever give up

NANAIMO – There are few events as diverse as the Certified Organic Associations of BC (COABC) conference each year. Large and small-scale farmers spanning the spectrum of different crops, livestock, regions and experience, they are connected by a commitment to organic production systems. With the theme of ‘Relationships in Transition: Land, Livestock, Waterways and Community,’ this year’s conference in Nanaimo, February 24-26, covered topics ranging from perspectives on indigenous food systems to succession planning, traceability and pasturing chickens.

One of the most significant transitions discussed at the conference was the province’s new mandatory organic standard, which comes into force in September 2018. The BC Ministry of Agriculture is supposed to be leading outreach to industry about the regulation while COABC is focusing on providing the tools and information that producers need to make the transition.

“Our biggest priority needs to be on communication with all parties impacted by this change, and all parties involved,” says COABC president Carmen Wakeling. “We need to support producers interested in transitioning to become certified organic. Those who are not interested need to understand that they will no longer be able to use the word organic.”

The Food and Agricultural Products Classification Act was introduced in February 2016 and passed in December. The new regulations seek to increase clarity for consumers after seven years of confusion around the term organic. The confusion was created by a loophole that allowed food to be sold as organic within BC without having to be certified under a provincial or national certification program.

BC’s organic industry has pushed for clarification and the new regulations have been welcomed by COABC. Under the new regulations, uncertified producers marketing food as “organic” will face the possibility of penalties, including a $350 fine. The regulations come into effect in September 2018, allowing time for interested growers to make the transition.

COABC is encouraging their members to mentor growers interested in getting certified. COABC has also been developing the Organic Online System, an online database that will help new entrants achieve certified organic status. The tool is expected to save farmers time by providing a more efficient and streamlined process and will also be used as a source for gathering comprehensive statistics on BC’s organic sector.

While the online tool is being developed, COABC is working closely with the certifying bodies to make sure they have what they need to manage increased demand leading up to the September 2018 deadline.

“We want them to be able to succeed in the onslaught of certification applications we’re expecting. They need to have resources and knowledge to be able to manage that,” says Wakeling. “We don’t have a lot of time before the regulations come into effect and it can take one to three years to get certified. Producers need to consider decisions sooner than later. If they leave it to the last minute, they might get stuck without enough time to make the transition.”

One of the other transitions that was not on the program but still came up at the conference was the issue of public trust. The COABC board has decided not to pay the BC Agriculture Council’s special member levy for a public trust campaign.

“One of the main reasons we have decided against it as organic producers is that we have built our organic principles around transparency and communication with consumers and feel we don’t need to invest further in it alongside a group with such diversity,” says Wakeling. “We always have the guiding principles of organics behind us, and that’s what we’ll stay true to.”

Despite COABC’s decision not to support the initiative, Wakeling stills sees value in the work, albeit from a slightly different point of view.

“Public trust is a good thing to pursue. It’s very much about consumer confidence with food, and it’s important to work continuously on improvements and transparency in our food system,” she says. “I accept that people in the sector want to improve, and I hope that’s what this work will bring – long-term improvement to the environmental practices and social practices in agriculture.