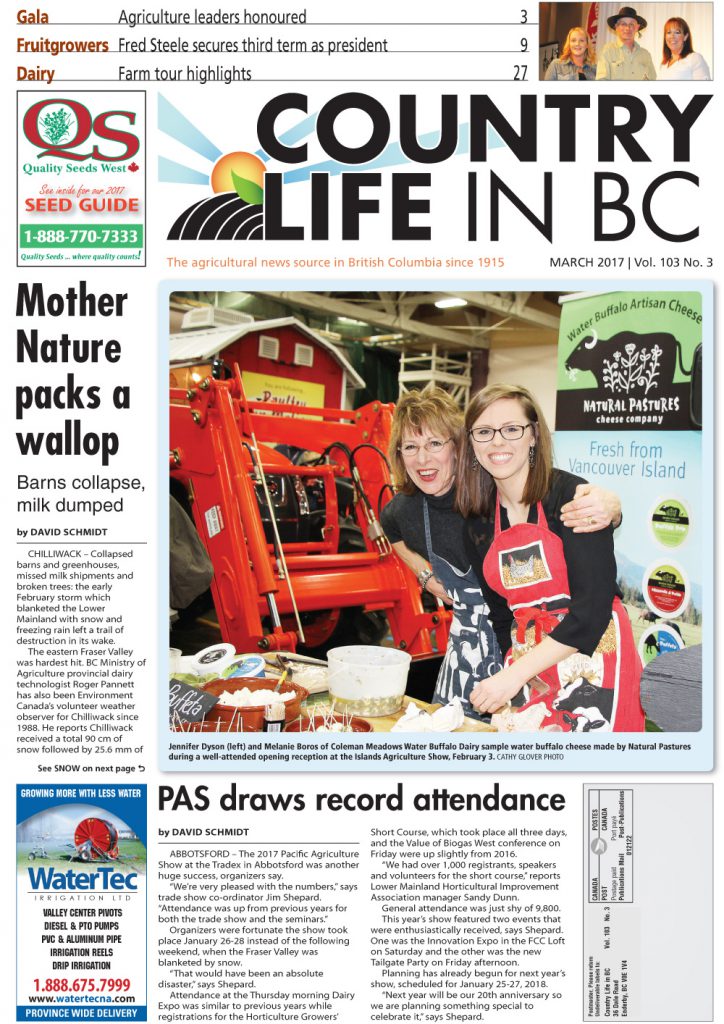 Research: What the public thinks about dairies

On the election trail

Researchers have basketful of berry options

CHILLIWACK – Collapsed barns and greenhouses, missed milk shipments and broken trees: the early February storm which blanketed the Lower Mainland with snow and freezing rain left a trail of destruction in its wake.

The eastern Fraser Valley was hardest hit. BC Ministry of Agriculture provincial dairy technologist Roger Pannett has also been Environment Canada’s volunteer weather observer for Chilliwack since 1988. He reports Chilliwack received a total 90 cm of snow followed by 25.6 mm of freezing rain during the week-long storm.

For the past few years, the BC Climate Action Initiative has been predicting more extreme weather events and this storm certainly qualifies. However, it is far from the record of 67 cm of snow that fell on Chilliwack November 16, 1996, or the 66 cm on February 14, 1923. Nor was the freezing rain a record. Nursery grower Gord Matthies recalls seeing two inches of ice on Cannor Nursery’s trees as a youth in the 1970s.

“We lost all our trees that year,” he recalled.

The damage this year was more sporadic. Matthies says Cannor lost many of its evergreens and a group of maples although other groups were unscathed. However, it is not his problem as the family sold the 380-acre wholesale and retail nursery in mid-December.

“A number of caliper tree growers (like Cannor) had damage from the freezing rain and melting snow,” reported BC Landscape and Nursery Association president Len Smit.

Most nursery growers with dormant plants escaped damage, including Kato’s Nursery (where Smit is the production manager) and Bradner’s Growing Concern (where he is co-owner), but had to do a lot of work to keep up with snow removal.

“The wind caused huge snowdrifts in west Abbotsford,” Smit said. “I had drifts to the top of my hoophouses (nine feet).”

His brother was not so lucky, losing about 600 square feet of his 20,000-square-foot glass floriculture greenhouse to the heavy snow. He was not alone, as one glasshouse in Chilliwack was lost completely.

“Growers who didn’t have heat in their greenhouses had problems with the snowload,” Smit said. “I’ve heard of damaged vents and eaves in a number of glass houses.”

The dairy industry may have suffered the most. Many milk pickups were delayed as tanker trucks could not get through.

“We had two farms which had to dump some milk because their farms were not accessible,” reports BC Milk Marketing Board general manager Bob Ingratta. Although milk is to be picked up from each farm at least every other day, milk may stay on-farm for up to four days in exceptional circumstances (if there is sufficient storage capacity).

There were also substantial delays in getting milk from Okanagan farms to plants in the Fraser Valley as all three highways connecting the Lower Mainland to the BC interior were shut down on February 9.

Ingratta said the impact on the dairy industry could have been much worse if not for the effort of both transporters and producers.

“Our compliments to Vedder Transport for working around the clock and substantial extra efforts…they battled through a lot of poorly plowed driveways and roads and a lot of wind on Sumas Prairie,” he stated, adding “most producers did an excellent job working with the transporters to clear driveways and roads as needed.”

Most of the milk got through but not all of the buildings did. A dairy barn on Nicomen Island collapsed as did a heifer barn in east Chilliwack. At least one farm lost part of its bunker silo while several others suffered some degree of damage.

In the Nicomen Island case, the damage was not as severe as it could have been. The milk had been picked up just prior to the collapse and quick, concerted efforts by neighbouring farmers and the fire department were able to free most of the 80 cows trapped within the barn with few injuries.

Poultry on two broiler breeder farms were not as lucky. One broiler breeder barn in east Chilliwack collapsed from the snow while another in east Abbotsford was lost due to fire a few days later. In that case, quick action by neighbours and the fire department kept the fire from spreading to other barns.

“Table eggs are normally picked up once a week but can stay in an on-farm cooler for up to two weeks if necessary,” BCEMB executive director Katie Lowe said.