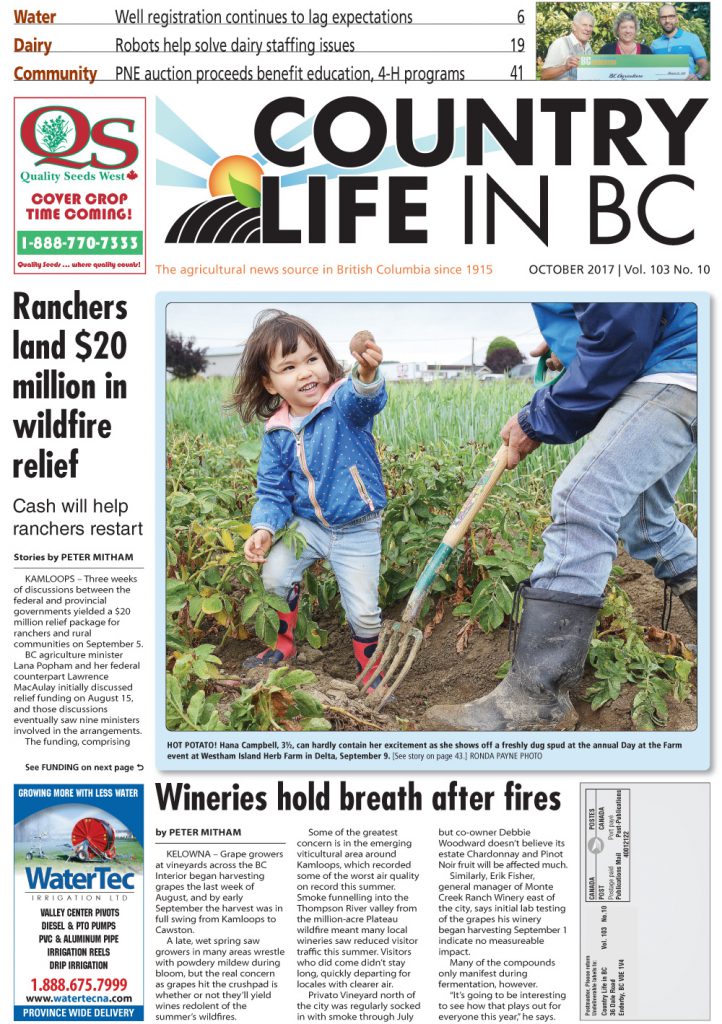 Back 40: Finally a weed agriculture could get high on

Op-ed: Co-operatives have potential for BC farmers

Show them we care

Kootenay MP weighs in on agriculture, dams and marijuana

Viewpoint: Getting to know BC’s agri-culture

Day at the Farm educates, entertains despite rain

ABBOTSFORD – 2017 has been “corn Armageddon” for local growers, says BC Ministry of Agriculture entomologist Tracy Hueppelsheuser.

Hueppelsheuser spoke to growers during the Pacific Forage Bag corn variety trials field day at Rosegate Dairy Farm in Abbotsford, September 15. Because the field days are primarily promotional events seed dealers use to show off their existing, new and prospective corn varieties, BCMA staff rarely attend. For them to speak at the trials is even more rare.

But this is a most unusual year, says PFG co-owner Alexis Arthur. Rather than go into great detail about each of the trialled varieties, “what we want to talk about are bugs and worms.”

They are everywhere, says Matt De Jong of Ag Solutions. After providing custom-cropping services for central Fraser Valley farmers through Rosegate for close to a decade, De Jong and his new partner, Derek Bailey, separated the business from Rosegate this year.

De Jong, who looks after over 1,500 acres of corn and another 1,000 plus acres of grass, says armyworm exists in “just about every field. It just depends on how bad it is.”

The infestation of true armyworm and Western corn rootworm caught just about everyone by surprise. Corn augmented with preventative traits can control or even prevent damage from the pests but is not commonly planted in BC. In fact, Arthur included few “multi-trait” varieties in her trial because they haven’t been big sellers here.

“We haven’t had the worms so we haven’t been recommending the more expensive multi-trait varieties to our growers,” she says.

“Now, some of those traits will work for us,” she states, saying growers will need to become “more discerning.” Just about all forage corn in BC is grown from Roundup Ready seed but growers will now have to consider using “G2”, “G3” or “G8” seed, which all have added traits. G2 seed will fight off corn borer, corn earworm and armyworm, while G3 and G8 seed also include protection against corn rootworm.

“The variety you plant is one of the management options you have,” Hueppelsheuser told growers, adding other management tools include crop rotation and/or spraying insecticides like Force.

“With preventative action, you won’t see as many beetles,” she said.

To help guide growers’ decisions, BCMA has embarked on an intensive monitoring and trapping program.

“We’re trying to get a sense of the hot zones in the Fraser Valley,” Hueppelsheuser said, noting there are many more worms in the central and eastern Fraser Valley than in Delta and Surrey.

She urges growers to practice crop rotation, saying fields which have been in corn three or more years in a row are most susceptible.

Late planting is another risk factor. Beetles lay their eggs in early June and “baby corn plants are a smorgasbord for them.”

That was certainly the case this year as relentless spring rains prevented early planting. De Jong notes planting was not only “three to four weeks later” but condensed into a smaller window.

“We normally plant for four weeks, but this year we planted all our corn in the last week of May and first week of June.”

The late start was followed by this year’s long, hot, dry summer. Although that meant higher heat units, De Jong notes “we’re still behind normal.” It also means farmers without irrigation are going to see much smaller crops.

“You can pick out the irrigated fields,” he says, predicting yields for farmers without irrigation will be down “10% or more.”

“This wasn’t a year to put in 2,500 heat unit corn,” Arthur adds. She admits lower heat unit corn also has lower yields but if the higher heat unit corn hasn’t fully matured before it’s harvested, “you don’t get the starch and protein so it’s not as valuable.”

And many farmers are choosing to harvest early. They want to minimize armyworm and corn rootworm damage and/or get the crop in before fall rains make the fields too muddy.

Some of the damage may not be visible until it’s too late. Hueppelsheuser notes the Western corn rootworm eats the brace roots, causing the corn to be unstable.

“Corn is already falling over and there will be more if we get wind.”

Although farmers were urged to “scout, scout, scout,” they must do so at the right time. The worms are nocturnal so the best time to see them is at night. That also affects spraying. Since contact insecticides are most effective, spraying is also best done in the late evening.