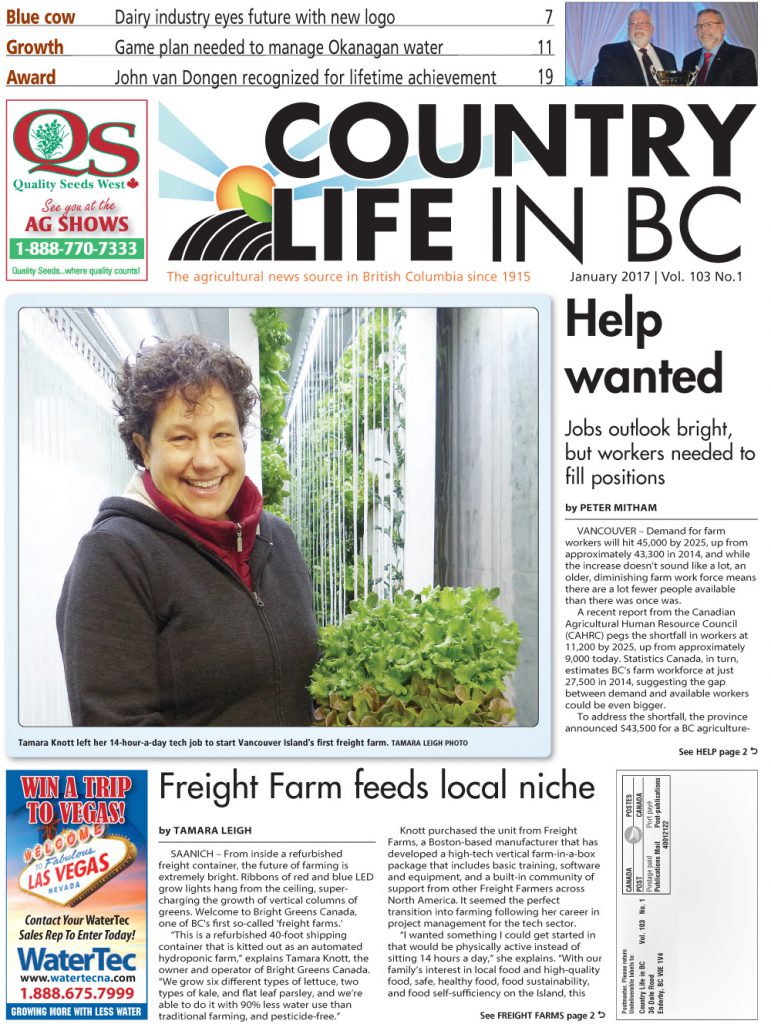 Arguments for wind power grow as hydro closes in

No surprise about pipeline

Food prices on the increase

Corn and the battle with bugs

Staring down the bottom line

VANCOUVER – The BC Milk Marketing Board is beginning another review of its quota and solids-non-fat policies, producers were told at the BCMMB annual meeting and producer meeting in Vancouver on December 2. The review is intended to address production shortages and an unhealthy butterfat to solids-non-fat ratio.

BCMMB member Jeremy Wiebe noted 15,000 to 20,000 kgs of butterfat “fall off the table” each month due to underproduction. He added the production is not lost completely as “we give it back to you in incentive days.”

BCMMB member Dick Klein Geltink said the Farm Industry Review Board-mandated review could take up to a year to complete but producers indicated they want action much sooner.

“We need to get milk to market today, not a year from now,” one producer said, clearly reflecting the mood of the entire audience.

Stan van Keulen, an often outspoken critic of BCMMB quota policies, said the board needs to go back to approaches used in the 1970s and 80s.

Several producers suggested the board look at other ways to allocate quotas rather than the pro rata system it currently uses. They pointed out that some producers do not have the cows, buildings and/or equipment to produce the extra 7% allocation they were given in 2016 and are therefore swapping it out or just not producing it.

They suggested farmers who do not produce the additional allocation should not receive future allocations. They stressed that selling the extra quota is not an option as the 10-10-10 LIFO (Last-In, First Out) assessment means sellers lose all the quota they have received in the past year.

“10-10-10 stifles the movement of quota,” one producer said in a comment reflecting the views of most producers. They encouraged the board to ask FIRB to change the assessment to a First-In, First-Out basis (which would reduce withholdings on most partial sales to the base 10%) or a system based on the average age of a producer’s quota holdings.

Another option is to extend the system currently used to allocate organic quota to the entire system. Organic producers are given a “sleeve” each quarter. Those who produce the full sleeve in a quarter then receive a portion of that sleeve in the form of a quota allocation in the following quarter.

Producers noted it should work just as well in the conventional market, which has also been experiencing a huge increase in demand. However, it would not work at all should the situation change and markets shrink in future.

Producers also discussed what to do about butterfat, since that is where all the demand is coming from. Many urged the board to change its component pricing to put more money on butterfat and less on protein so producers will be encouraged to produce milk more suited to current market demands.

That seemed to resonate with the board, with Hoogendoorn noting “producers respond to financial incentives. community and more attractive as well,” she adds.

While there are hundreds of Freight Farms operating in the United States, Bright Greens Canada is the only one in BC, and one of a very small number across Canada. Knott sees a lot of potential for shipping container-based for the Prairie winters and more remote and northern communities where fresh produce is expensive when it’s available at all.

“It makes a lot of sense to grow these types of very perishable greens in this setting instead of trying to grow them in Mexico and put them on a truck and have them sit on the truck for three weeks until they get here,” she says. “I think as we build the business and expand what we’re doing, it’s going to offer something worthwhile to our community and help make us more self-sufficient in producing better quality food.”elp.

“This may include re-evaluating the effectiveness of Canada’s immigration programs in terms of meeting the needs of the agriculture sector,” writes the Conference Board of Canada in a recent briefing paper, produced with CAHRC’s support. “Without TFWs, we may face the prospect of a significant portion of Canada’s arable land lying fallow. That would be a tragedy.”