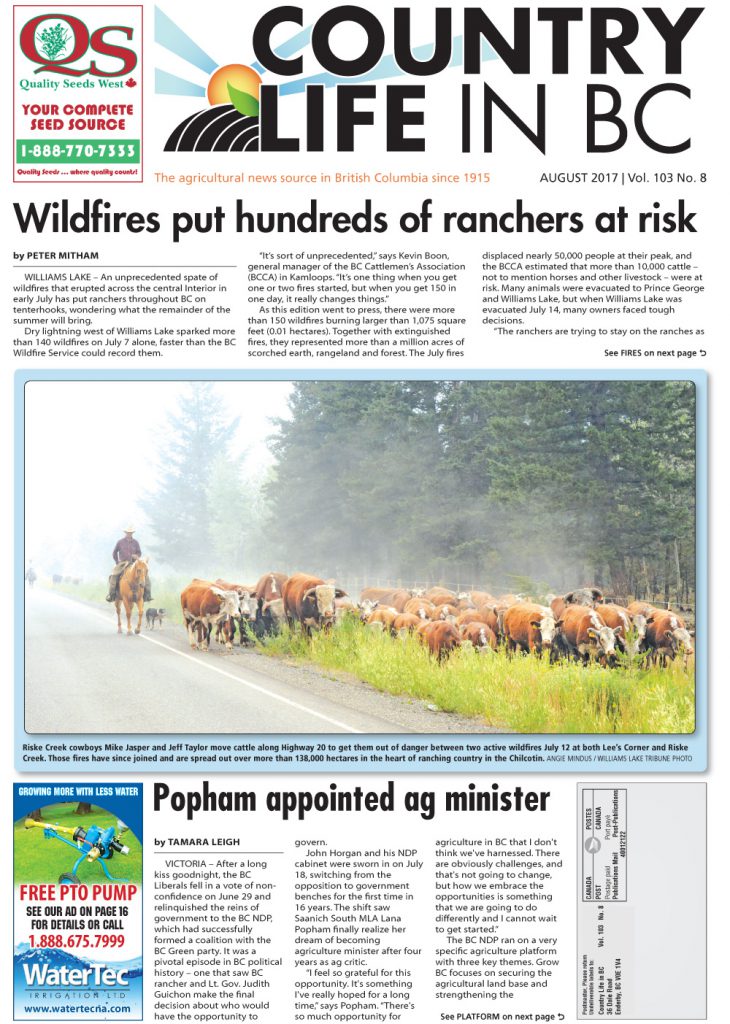 WILLIAMS LAKE – An unprecedented spate of wildfires that erupted across the central Interior in early July has put ranchers throughout BC on tenterhooks, wondering what the remainder of the summer will bring.

Dry lightning west of Williams Lake sparked more than 140 wildfires on July 7 alone, faster than the BC Wildfire Service could record them.

“It’s sort of unprecedented,” says Kevin Boon, general manager of the BC Cattlemen’s Association (BCCA) in Kamloops. “It’s one thing when you get one or two fires started, but when you get 150 in one day, it really changes things.”

As this edition went to press, there were more than 150 wildfires burning larger than 1,075 square feet (0.01 hectares). Together with extinguished fires, they represented more than a million acres of scorched earth, rangeland and forest. The July fires displaced nearly 50,000 people at their peak, and the BCCA estimated that more than 10,000 cattle – not to mention horses and other livestock – were at risk. Many animals were evacuated to Prince George and Williams Lake, but when Williams Lake was evacuated July 14, many owners faced tough decisions.

“The ranchers are trying to stay on the ranches as long as possible to manage those so they can keep them contained as long as they can and move them to what they hope will be more safe spots as they go along,” Boon said. “But it’s a chore.”

While livestock losses are unknown, a variety of sources confirmed the loss of cattle and other animals. Bradner R Farms lost nearly a dozen dairy cattle either directly or indirectly as a result of a fire at Ashcroft, which also devastated the local First Nations reserve. A video a UBC researcher shot during a harrowing journey through the fire zone around Hanceville noted the presence of animals in the flames.

The full tally won’t be known until ranchers can get back into the evacuation zones and round up their animals, however.

Driving the fires has been a complex yet conducive mix of conditions.

Winter delivered above-average snowpacks to many parts of the province, and a late spring prevented farmers in many areas from getting into sodden fields until late May. Areas such as Riske Creek were even recording morning temperatures of -3 degrees Celsius as late as the week of July 10.

The cool, damp conditions provided the right conditions for forage and vegetation of all types to grow.

But then a sudden onset of summery heat in late June sucked moisture out of the ground.

Temperatures at 100 Mile House, the community closest to the Gustafsen Lake fire, shifted from a high of 16 degrees Celsius on June 21, to 25 degrees on June 23 – a day when the morning temperature was just 2 degrees. The following day, temperatures reached 29 degrees. During the first half of July, temperatures regularly exceeded 25 and often 30 degrees.

Over the same period, Ashcroft, one of the first communities to burn, saw just three days below 30 degrees, and two days where temperatures hit 38 and 39 degrees.

A lack of rain pushed the month to one of the driest on record, leaving nothing to replenish the lost moisture and shrivelling the spring’s lush growth into the perfect fodder for fire.

“The moisture that is in and under the canopy of the trees and on the grass has disappeared overnight. We went from, three weeks ago, ample moisture to having these 35, 38 degree days and it’s just dried things out immensely,” Boon said. “It’s just a tinderbox, pretty much Prince George south.”

The tinder began lighting in early July as careless humans and impartial lightning began doing their work, culminating in the firestorm that struck the Cariboo on July 7.

The sharp start to the fire season has many wondering what comes next, given that the hottest days of summer have yet to arrive.

“There’s not too many ranchers in the province and people in the country that aren’t sitting a bit on pins and needles watching what’s happening in these fire areas,” Boon said. “It just takes one spark from one little thing and it could be totally innocent.”

The spark could be from horseshoes on rocks, or a metal implement, or even an ember lurking in a fleck of dry cigarette ash.

“There are so many little hazards out there that we don’t think are possible – they can happen,” Boon said. “We’re all at risk. This is a big firepit right now.”

While a controlled burn took place in the Mayfield Lake area west of Dog Creek Road this spring in an effort to mitigate the risk of a catastrophic wildfire in the Cariboo, each season’s moisture and weather remain critical risk factors for wildfire.

“We sometimes think, well, a fire went through here a few years ago and we think that we’re safe for a few years, but we’re safe until the ground gets dry again,” Boon said.

Once the fires have passed, ranchers will face a host of risks, both financial and operational.

Claims for lost property and livestock will be key, as well as arranging feed supplies for animals if dry conditions limit forage opportunities over the summer.

“The grazing lands to get us through the summer … are going to probably come up a little bit short, depending how much this fire burns – and the subsequent fires coming up because we’re at the start of fire season,” Boon said.

Two years ago, during the drought of 2015, government and financial institutions offered assistance ranging from flexible payment options to special credit facilities to help tide producers over.

Communities and businesses such as TNT Hay & Cattle Sales have also rallied to provide in-kind support for evacuated livestock in the short-term, while the outgoing BC Liberals pledged $100 million in relief funds that the incoming BC NDP government is open to increasing. In addition, Farm Credit Canada has pledged $25,000 in relief funding.

Rebuilding ranch infrastructure will be the next hurdle, from outbuildings and irrigation systems to fences.

Collisions between cattle and motor vehicles were a hot topic for ranchers before this summer’s fires, and will be even more of a concern in areas where the flames passed. With millions being spent to renew the existing fence infrastructure, any losses to highway fencing are critical.

When the fast-moving Rock Creek fire burned through kilometres of new fencing, ranchers moved swiftly to replace what had been lost – as much for their cattle’s safety as that of motorists.

“We were building fence before the fire was out, and we expect to be doing the same [this year],” Boon said. “It’s a huge issue for us.”

Poultry abuse underscores need to measure up
Next Post: Ranchers first line of defense against wildfires