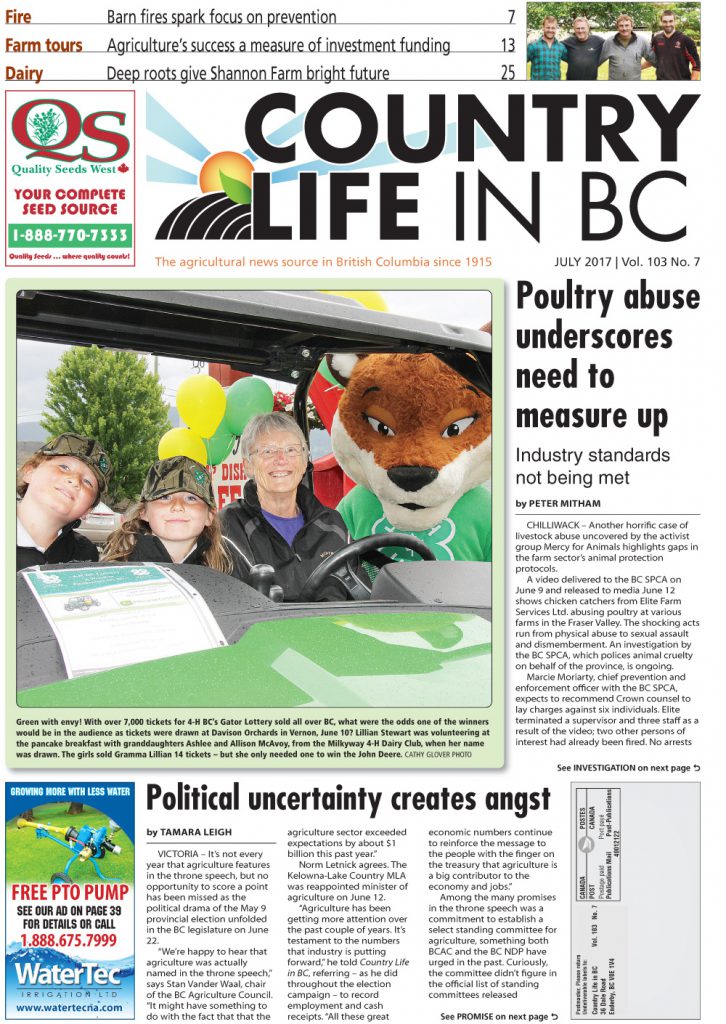 ABBOTSFORD – Abbotsford has taken a proposal to exclude a total of 696 acres from the Agricultural Land Reserve to the public. The land is meant to recharge an industrial land base of 2,069 acres that is nearly exhausted, thanks to an outflow of industrial users from Metro Vancouver – many of which are now leaping over the city towards Chilliwack in search of land.

“We’re going to be out of serviced industrial land in about four to five years,” explained Abbotsford mayor HenryAbbotsford Braun prior to an open house in mid-May.

Right now, the city has approximately 212 acres of vacant, readily developable industrial land. Many are in smaller parcels, unsuitable for large-scale industrial development.

“The stuff that we have left is small chunks that are not contiguous – they’re half an acre here, and an acre there and two acres there,” Braun said. “If you tried to find 10 acres of industrial land in Abbotsford, I don’t know where there is a piece.”

This has led some companies to look east to Chilliwack.

Abbotsford was a possibility for MolsonCoors, for example, but Chilliwack had the land and rail access that clinched the deal.

“When they first approached us, they were looking for 18 acres, preferably on rail,” Braun said. “We had two properties that we could direct them to but then they decided for future expansion that they needed 25 acres. That knocked us out of the ballpark. We don’t have 25 acres on rail.”

Chilliwack, while facing the depletion of its own stock of industrial land, had the good fortune of having won an exclusion from the ALR that accommodated agricultural and food processing uses. This was perfect for MolsonCoors, while Abbotsford-based Berryhill Foods Inc. opened a blueberry processing plant on an adjacent parcel last year. Chilliwack also saw Pacific Coast Heavy Truck Group acquire a six-acre parcel while Pacific Dairy Centre Ltd. is relocating its headquarters from Abbotsford to a 10-acre parcel on Chilliwack Mountain Road.

Abbotsford’s new official community plan (OCP) limits residential development to existing areas, but the lack of industrial land and loss of companies to other municipalities has the city taking a second look at its agricultural land base.

The first look came in 2004, when Abbotsford identified a need for 1,300 acres to accommodate industrial growth. It asked the Agricultural Land Commission (ALC) for 925 acres but received just 445 acres.

Now, the city is thinking strategically, targeting land adjacent to Gloucester Industrial Estates in Langley and the Southern Rail line as well as parcels north of Abbotsford International Airport. Together, the parcels represent approximately 1% of the city’s agricultural land base. The majority are less than 10 acres, a size that makes them less likely to be farmed. (Typically, efforts to make agricultural properties less vulnerable to exclusion have focused on limiting subdivision and reduced parcel size.)

Abbotsford residents like Nancy Teichgraf know there’s no easy answer for the city.

“It’s tough. I’m all for business but we are the city in the country,” she said as she considered the city’s open house. “I’m for our wonderful raspberry capital of Canada … [but] I do find the development of site B is perfect … [there’s] only a few raspberry fields.”

But the loss of farmland now diminishes opportunities for farmers in the future, said Jill Robbins, a director of the BC Young Farmers who operates K&M Farms with her parents. K&M farms is in the Bradner Road area Abbotsford is proposing for industrial use.

“We’re all dealing with a fixed land base on some level, so how come they can always claw back from ag land but they don’t ask industrial to tighten up their boots?” Robbins asked. “Where is the breaking point? There is zero hope or future for young farmers when this keeps happening.”

K&M is in one of the areas Abbotsford wants to exclude, but Robbins says its success shows the potential for small-lot agriculture.

“Some people will say that a five-acre parcel is worthless. I farm seven acres and I make over $100,000 a year. There is very intensified vegetable production. Chicken barns only need a couple of acres and they make a ton of money on a small acreage,” she said. “Who is planning for the growth of agriculture? Where is the growth and the vision for agriculture? Somehow we have to co-exist.”

With files from Ronda Payne