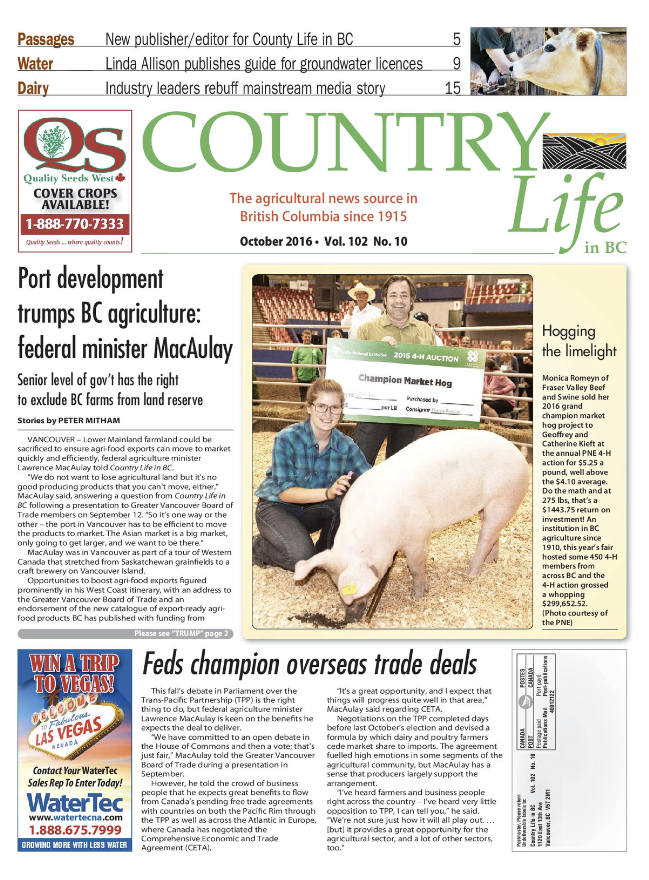 BC farmers on watch list as on- hand assets drop

Pest management strategies about to get easier

Feds invest in BC- based dairy innovation

End of era as OK feedlot packs it in: Southern Plus

TRU gets funding for drone research

It’s not easy being organic: Bite Me Organics

Changing face of farming in Pemberton

Canadian cherry grower Jealous Fruits has shifted to night picking to help combat the impact of heat and smoke on workers and on the fruit. Crews start work at midnight, using headlamps to light their way. By then, the temperature has cooled from daytime highs in the mid-thirties to around 27° C. The crop of Lapins in this orchard in Kelowna was heavy. Some orchards weren’t pruned as heavily as they might have been after a wet harvest two years ago and a cold snap in 2020 impacted cherry production. Sign up for free FARM NEWS UPDATES from Subscribe to Country Life in BC, the agricultural news source for BC's farmers and ranchers. buff.ly/2H3dK8k ... See MoreSee Less

So God created a Farmer- PAul Harvey. Thank you to each and everyone of you.

The province has formed the B.C. Indigenous Advisory Council on Agriculture and Food to guide the full integration of Indigenous food production within the mandate of the BC Ministry of Agriculture, Food and Fisheries. The first of its kind in Canada, the council is chaired by Okanagan Indian Band Chief Byron Louis and includes 11 members from Indigenous communities around the province, each appointed by the agriculture minister for terms of up to two years. The council operates as a secretariat within the agriculture ministry, and will hold meetings four times a year. Among the objectives for the current year are identifying Indigenous priorities for inclusion in the federal-provincial policy framework that will follow the Canadian Agricultural Partnership in 2023. ... See MoreSee Less

Wildfires continue to threaten farms and ranches in BC, with 36 new fires sparked over the weekend. A new wildfire in the Okanagan Falls area on Sunday forced the evacuation of nearly 80 properties along McLean Creek Road, a prime grape-growing area. Further north, the BC Ministry of Agriculture, Food and Fisheries says it’s supporting livestock movement requests from the Regional District of Bulkley-Nechako and the Thompson-Nicola Regional District but the number of livestock has yet to be determined. While cool weather is expected later this week, Environment Canada warns that daytime temperatures in parts of the central and southern Interior could reach 38 C through Wednesday. [BC Wildfire Service photo] ... See MoreSee Less

The operative word is “small.” The province has just announced that “small” secondary residences for extended family, agritourism accommodation, farm labour housing or rental income will be permitted within the Agricultural Land Reserve. Although they've removed the requirement that additional residences must be used by the landowner or immediate family, secondary residences will be limited to 970 square feet on parcels 40 hectares (98 acres) or less, and 2,000 square feet on larger properties. Secondary residences will not need ALC approval, but will still have to be approved by local governments. The new rules come into effect December 31, 2021. Country Life in BC is the agricultural news source for BC's farmers and ranchers. www.countrylifeinbc.com/province-allows-secondary-homes/ ... See MoreSee Less

Country Life in BC link to article is not working

while the houses at be small this is huge!

Thank you! The article perfectly sums up the devastating impact Bill 52 and the removal of secondary dwellings has had on farmers and their families. The extreme delay of 3 years to correct this insulting legislation was really unfortunate.

A dry spring and the recent heat wave has pushed many parts of southern BC into some level of drought. Eastern Vancouver Island is at Drought Level 4, meaning conditions are likely to impact people and ecosystems. Sandhill Creek, Koksilah River and Black Creek are areas of special concern. On the mainland, the Salmon River watershed is also at Drought Level 4 and the entire Okanagan Valley, among several other areas, is at Drought Level 3. The ratings employ a new six-tier drought rating system the province is piloting this summer, which could replace the existing four-level system. Provincial officials stress the importance of water conservation and encourage water users to prepare for further targeted water restrictions. In addition, the risk of wildfire increases as the prolonged dry spell continues. Check out this link for more information on drought management in ag: buff.ly/3AQ80tU ... See MoreSee Less

“We do not want to lose agricultural land but it’s no good producing products that you can’t move, either,” MacAulay said, answering a question from Country Life in BC following a presentation to Greater Vancouver Board of Trade members on September 12. “So it’s one way or the other – the port in Vancouver has to be efficient to move the products to market. The Asian market is a big market, only going to get larger, and we want to be there.”

MacAulay was in Vancouver as part of a tour of Western Canada that stretched from Saskatchewan grainfields to a craft brewery on Vancouver Island.

Opportunities to boost agri-food exports figured prominently in his West Coast itinerary, with an address to the Greater Vancouver Board of Trade and an endorsement of the new catalogue of export-ready agri-food products BC has published with funding from Growing Forward 2.

But the thrust of his remarks focused on Vancouver’s port facilities and the launch pad those provide for Asia-bound products.

MacAulay’s comments won’t sit well with municipalities such as Richmond or local farmland advocates who have challenged the Port of Vancouver’s plans to tap local farmland for port-related uses.

Yet the port, as a federal entity, holds the trump card: while it has pledged to file exclusion applications to remove protected farmland from the province’s Agricultural Land Reserve, it’s under no obligation to do so as an arm of the senior level of government.

“I don’t think we would be bound [by the Agricultural Land Commission],” Robin Silvester, president and CEO of the port authority, said earlier this year. “We have supremacy.”

Site Economics Ltd. prepared a report for the port authority in October 2015 that estimates port activities will require approximately 2,700 acres by 2030. The demand could cost Delta alone 1,500 acres of productive farmland, according to the Delta Farmers’ Institute.

Silvester believe local agriculture is “almost meaningless” when it comes to local food security but that stance is at odds with MacAulay’s message to the Greater Vancouver Board of Trade.

Responding to a question from the audience regarding organic production, MacAulay said his job is to ensure farmers in Canada are capturing local markets before venturing into exports.